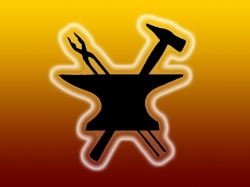 The Crafting Skill in the Fyxt RPG system can lead to incredibly powerful and unique items for a character. Fyxt allows players to build items in an a la carte fashion: just choose the effects you want. In fact, you can easily create a Fyxt RPG item that is completely unique and fits perfectly into a player’s character concept. First, check for existing items and if they are something that you would like to craft. Browse through the Fyxt RPG Items and Gear Search Tool.

Players can find which effects each Archetype Specialty has access to with the Archetype Power Comparison chart.

Below is a chart showing the details of the Crafting Skill in the Fyxt RPG. The first column shows the minimum Character Tier/Character Level to use the item. Next, is the Crafting Skill Check need to create the Fyxt RPF Item and then the cost to do so. The Effect/Step and Power Cap of Item shows the limits of the strength of the effects that can be on the item. The last column shows an easy conversion chart to create the item as a Disposable Fyxt RPG Item instead.

Characters must have time during the game for crafting. Characters cannot be involved in other things. The GM has final say on if crafting can happen and how long the crafting will take.

If it is determined the character will have time to craft, the player will roll one Crafting Skill Check for the item. One roll will also be used if crafting a set of Disposable Items.

The character is now indisposed and unable to do anything else other than crafting. In some cases the GM may allow other minor outside activity. The crafting process takes 1/2 of a day. In the case of days with 24 hours the character must spend 12 hours of it crafting.

If the Craft Skill Check is a natural 20, and your roll succeeds in crafting the item, then you will only cost you 50% of the total value to create instead of 90%.

If the Crafting Skill Check is a natural 1, then the crafting attempt will cost the character 50% of the total value of the Advanced Fyxt RPG Item.

Disposable Items are also items that have a limited number of uses such as wands or medical stimulant packs. These items may have 5, 10, or more uses and then they become useless. Each use is treated as a separate Disposable Item.

When crafting Disposable Items they can be created at a 10 to 1 time ratio. This means that in the same amount of time it would take a character to craft a +1 Attack Rifle they could also create 10 +1 Attack Potions.

Due to the immense power of Legendary Items they are very difficult and expensive to create.